Simflofy's Records Management Service will let users manage their files as records allowing you to put records on hold, add security marks and set retention schedules. In Simflofy a record is any document that has a Retention Schedule applied to it.

In a Federated Search view with RM capabilities you can add a retention schedule to a file which will add additional records management action options.

From the Records List tab you will find a list of all of the files that have been declared as records. Use the search box to filter the list by file name. 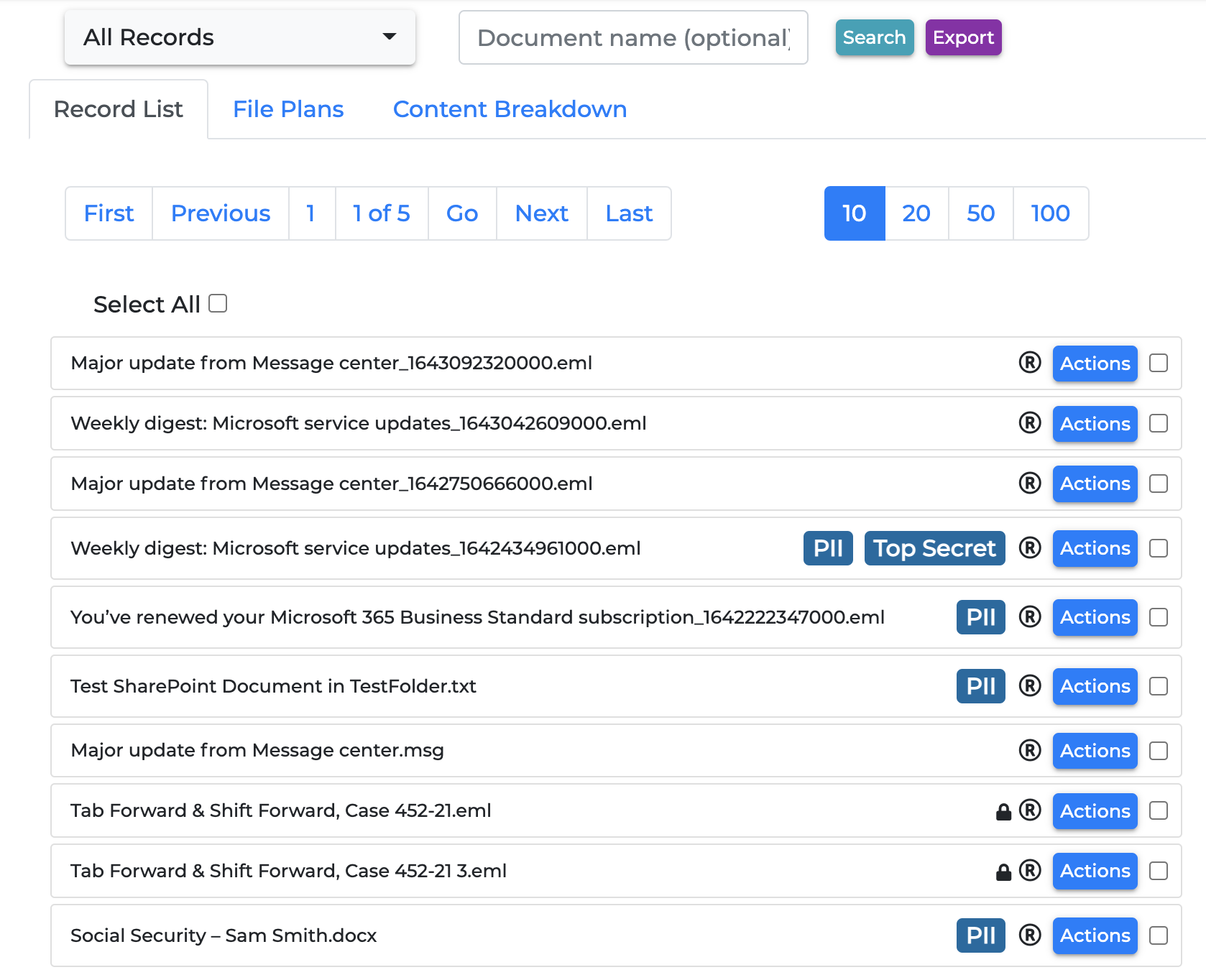 Each record will have an action button on it for you to apply various actions to the record. Some of these actions can be done for multiple records by using the Bulk Record Actions. Note: Certain actions will not list as available if the source repository doesn't allow them.

View all the details of the selected record including disposition schedule and document history. From the detail pane you can take actions on the record such as refile, undeclare the record, delete it, put the record on hold, and facilitate document events.

Destroys the document in the source repository, removes the index from federated search, and optionally, deletes all RM History/Metadata associated with the document.

This action will remove the file from the Record Management View.

Putting a record on hold will prevent all interactions with the record and its metadata until the hold expires or is removed. Records can have multiple holds and holds can be indefinite. Creating Holds

Once applied to a record, only users and groups with that mark will be able to interact with this document. Security Marks can only exist as part of a Security Group and are not shared between groups. Assigning Security Marks 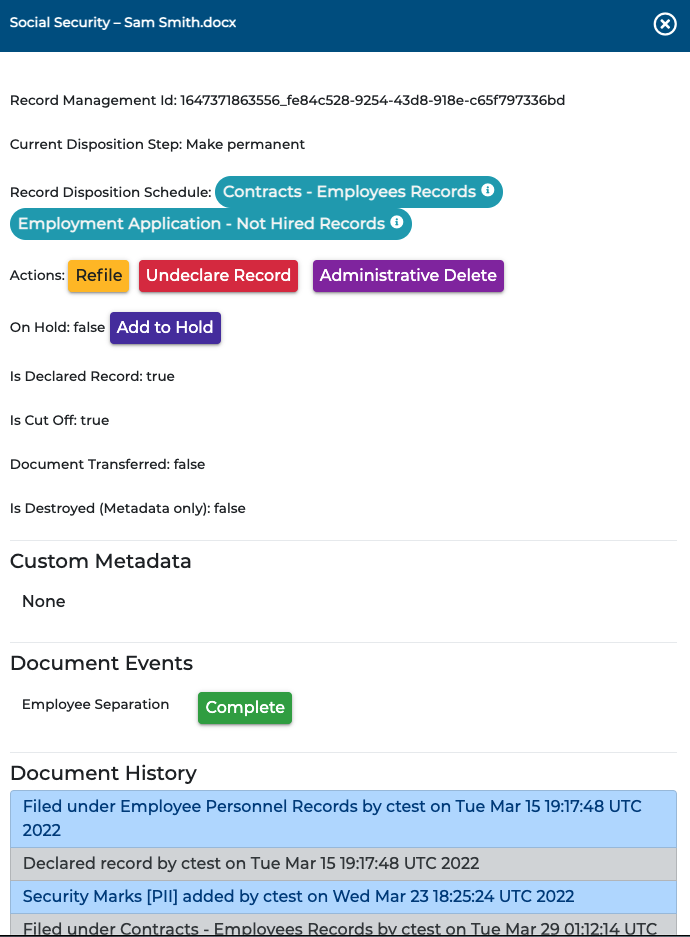 A retention schedule is a list of Disposition Steps that can be applied to a document. A record can have multiple schedules.

Files can be added to retention schedules in Federated Search from the Records Management button.

Records can be added to a retention schedule by 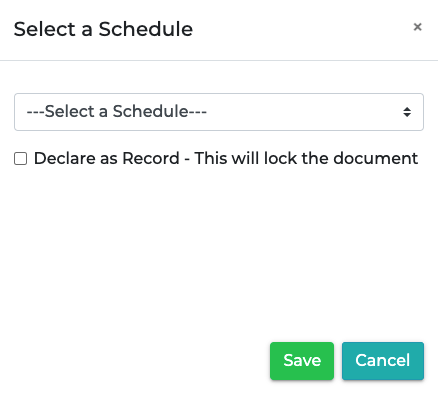 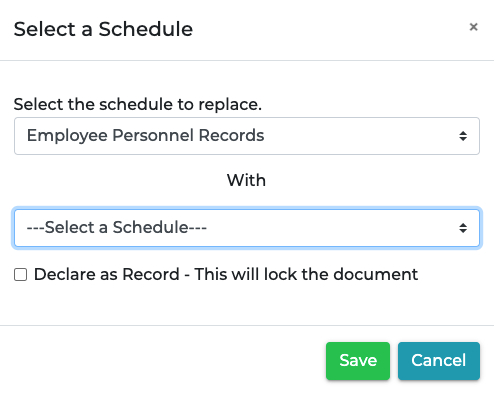 Putting a document on hold will lock a document to all other actions. Records and Active Content can be under multiple holds at once.

To place a hold on a record, select Add to Hold from the dropdown Actions or Bulk Record Actions button. In the Add to Hold window, select the Hold you want to place on the file(s). And click Save.

All holds are searchable from the Record List tab and in Federated Search. 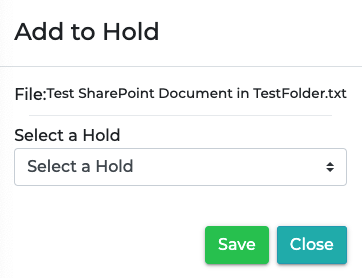 Selecting this option from the RM Actions dropdown list will take you to an audit list of all records in the platform.

You can also use the search field to narrow down the audit list. 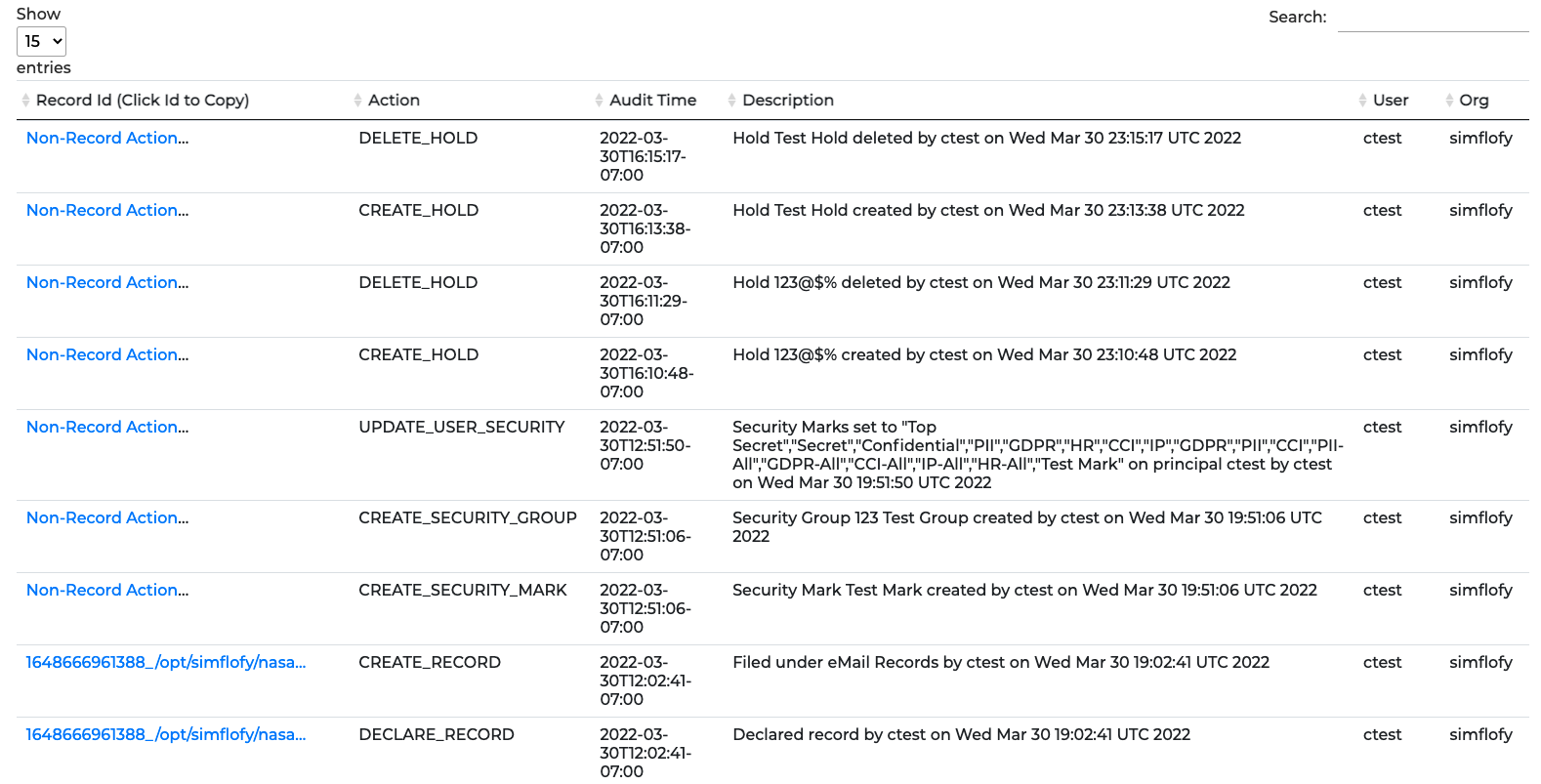 Export
Using the export button users can export the audit table to a CSV or PDF file. From the export form you have several options.

In federated search Simflofy lets users mark files as records, search for records and record holds. This can be done individually or in bulk through the bulk action button in the top menu.

With the Records Management result widget added to your federated search content view you can add a record to a retention schedule, view any events that happened on that record as well as view the record's metadata.

To mark a file as a record click the Records Management button next to the file and select Declare as a Record from the dropdown list.

From here you will be prompted to select a retention schedule for the record. And the declare as a record box will be checked automatically.

Note: In Federation Services, being a record does not automatically lock a document to changes via content services. 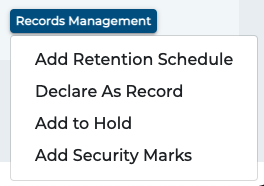 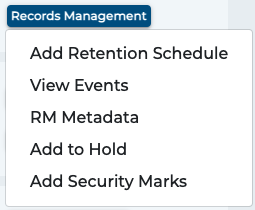